So we bought a house. It isn't our first house, but for all practical purposes it might as well be. We have been in "temporary" houses for all our married life. The first house we bought was teeny but adorable and we therefore crammed way too much stuff into it. When we moved, we were smart enough to rent until we sold the first house. By the time the first house sold, we realized we were going to move again.
The upshot? For almost 11 years, anywhere from a third to half of our worldly goods have been in boxes, attics, and storage units. That is a LOT of crap to weed through. Add in outgrown baby clothes and paraphernalia, and I decided to have a yard sale before we moved. Observe:


I am not a yard sale person. I am never doing that again. Ever. But it did pay for about half of the painting we did in the new house. Because the new house featured a great deal of brown. In many different shades. Also, dead animal decorating. Aside from leather and a cowhide rug, I am not a fan of dead animal decorating. I don't want anything with eyeballs hanging on my walls. But this is what the den looked like before the previous owner moved:


Seriously, y'all. A bear, four deer- or maybe three deer and an elk, a couple of birds, and I think there was a fish in there somewhere. It was a bloodbath. Or, if one is being generous, vaguely medieval. And very, very brown. It's still brown because we haven't gotten around to painting it yet.

So. First we painted the dining room, foyer, living room, one bedroom, and the master bedroom. They were all brown:

Then came the boxes. This is a sample assortment of the boxes in question. Note the formerly brown walls are now green in the dining room that is currently a staging area for unsorted boxes, which almost certainly contain books:


For those of you who are already organized, that might not look so bad. For the organizationally challenged or people married to my husband, this represents a nightmare. When I pack a box, it is filled with like items that should be unpacked in the same place. When he packs a box, it is "Holy crap! I bet I can beat the world record for cramming stuff into a box the fastest!" The items in said box could include shampoo, a lamp, three coffee mugs, a sort of melted candle, a few coloring books from 1970, and some back issues of Rolling Stone. Every box represents an adventure or a nightmare, depending on how you look at it. Or how tired you are of figuring out where to put stuff. Or whether or not said husband is at home and might catch you throwing out his first Playboy.


As a side note, I am thrilled with the ribbon rack. It hurts my heart to give someone and ugly present, especially when I knew that somewhere in all those boxes I had this abundance of ribbon and wrapping paper. I even found my special super-sharp ribbon scissors! And about five rolls of the invisible variety of scotch tape!

At any rate, every box represented at least an hour of sorting, donating, and throwing away stuff. And I still have more boxes! But the living room now looks like this (work in progress, but it's taking shape):


I have a World History shelf, a yearbooks shelf, a Southern Authors shelf, an "I was an English major and here is the proof" shelf, and my favorite, a Dungeons and Dragons Shelf! The organic chemistry, physics, and medical tomes are in the cabinets. And it smells like a library. *happy*


Also, I absolutely see the point that frequent movers have about the benefits of eBooks. But with eBooks, you can't put your friend's books on the shelves in the living room!

In fact, I am so enamored of having friend's books on the shelves that I am considering dedicating a shelf to just that. Of course, that means that I will have to purchase dead tree versions of many things I own in digital format, but oh, well.
The best part of the new house, though. Ah. It is marvelous. And it isn't even in the house:
Here it is as viewed from the house:

The move continues. I still have to paint things. We have furniture projects to complete. But it's slowing down around here and hopefully the dust will settle into a nice, ordered living space. The closets are done (why, yes, I did divide the kid's closets into "school uniforms" and "other" sections), the kitchen is put together, the sheets are resting comfortably in assorted bins labeled "king, master BR", "queen, guest BR", and "Full, Pirate BR" or "Full, Princess BR." At long last I have the square footage and closet space to unleash my OCD.

When I get everything all pretty I'll post some more pics.
Posted by Laurel at 10:52 AM 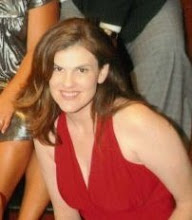 Laurel
I throw one major party every 4-5 years. For whatever reason, this is the year. My kids have birthdays three days apart, so they will celebrate on the same day. With two distinct themes.